It was a pleasant surprise to hear 3UZ Radio Sport 927, Melbourne for the first time on the 14th September (A possible South African first). The station also made it through during the following evening on the 15th September with a few clear id's.

Chief Engineer Kelvin Brown kindly verified my report this week and added : " ... The audio quality was not too bad considering the distance and possibly a couple of bounces of the ionosphere ... We use a 5kW Nautel transmitter into a single vertical antenna. The transmitter is located at Lower Plenty which is approximately 15 kilometres from Melbourne Victoria ... "
Posted by Gary Deacon at 11:40 AM No comments:

2BL Sydney is the flagship station of the ABC Local Radio Network and the first full-time radio station in Australia, having commenced broadcasting on the 23 November 1923.

6KP Karratha is the usual dominant Australian station on 702 kHz to make it through to Fish Hoek. An interesting one second delay of // ABC programming was noted on 702 kHz during the evening of the 15th September.

A lucky propagation break resulted in a local id from co-channel 2BL Sydney for the first time (A possible South African first). It was also unusual to hear signals from both the east and west coast of Australia simultaneously on the same frequency !

I was fortunate to hear 6WB Kununurra on 693 kHz during two consecutive evenings at the sports field location. Station identifications of 989 FM (14th September)and 94.5 FM Radio Larrakia, Darwin (15th September) were noted for the first time. Relays of both stations are carried during the local early hours.

General Manager Colin Cameron kindly verified my e-report this morning with a friendly reply : " ... Congratulations on taking the trouble in today's modern world to find distant stations on the AM Band. Without doubt that would be one of the best long distant reports I have ever come across ... "
Posted by Gary Deacon at 8:44 PM No comments:

1410 CFUN Vancouver BC received at Seefontein ! 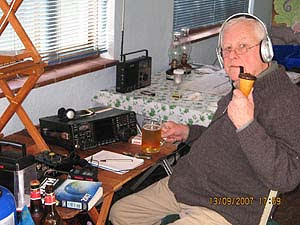 The astonishing reception of Canadian MW station CFUN, Vancouver BC on 1410 khz by fellow South African dxer John Plimmer occurred during a recent Dxpedition to Seefontein. In John's own words : " ... Quite the best catch I ever got in my life and the only station I have ever recorded West of the Rockies ... "

A recording of the actual reception on the 14th September has been included at the beginning of the audio clips section. John used his Icom IC-756 PRO III via a 300 m BOG (Beverage On Ground) "over the Shoulder " towards North America.

So far as I'm aware this is a new South African record. 1410 CFUN is the most distant Canadian MW station to reach South Africa at over 16 500 km. It is also the first MW station from British Columbia to be heard in SA. The station is almost 2000 km further away than CBW Winnipeg, Manitoba which I was fortunate to receive over 20 years ago.

Congratulations John on an amazing dx achievement and one of the best dx catches in years !

John also received a reply, on the 21st September, from CFUN Program Manager Stu Ferguson who kindly verified the reception.
Posted by Gary Deacon at 11:49 PM No comments: