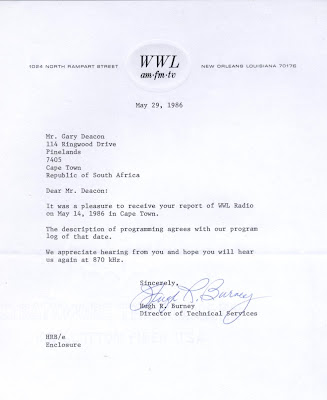 WWL Director Of Technical Services Hugh Burney kindly responded to my reception report to the station.

WWL was one of the few radio stations to remain on air in the area during the immediate effects and aftermath of Hurricane Katrina on New Orleans and the Gulf Coast in late August 2005. Announcer Garland Robinette kept broadcasting for a time from an improvised studio built in a closet after the studio's windows were blown out.
Posted by Gary Deacon at 11:04 AM No comments: 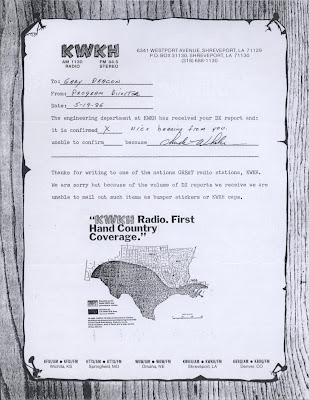 It was a pleasant surprise to hear KWKH on 1130 kHz for the first time (A South African First) on the 12th May 1986 via the FRG7 and 30 metre longwire antenna at Pinelands.

I was fortunate to receive the above QSL form letter in response to my reception report.
Posted by Gary Deacon at 11:02 AM 1 comment: 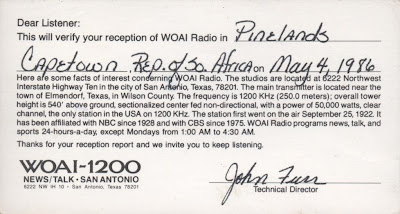 I was fortunate to receive the above QSL card in response to my reception report.
Posted by Gary Deacon at 12:52 PM No comments: 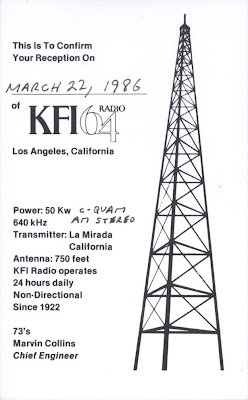 KFI on 640 kHz was received at Sandbaai for the first time (A South African First) on the 22nd March 1986. It was a pleasant surprise to hear the station over a remarkable distance of 16 091 km via the FRG7 and 30 metre longwire antenna.

I was fortunate to receive the above QSL card and car bumper sticker in response to my reception report. 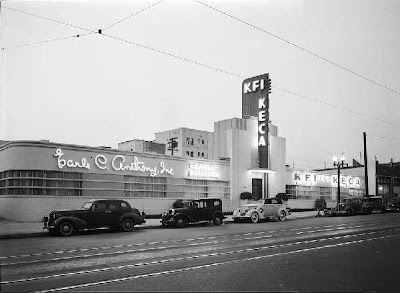 An early 1940's photograph of the KFI/KECA studios, located at 141 North Vermont Avenue. KFI remained in The Morgan, Walls and Clements building until 1975 (Photograph with kind permission from Barry Mishkind whose interesting and informative website www.oldradio.com includes additional images and recollections from KFI's early days).
Posted by Gary Deacon at 3:58 PM 2 comments: 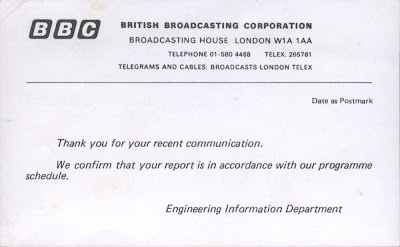 BBC Radio 2 on 909 kHz used to be a regular guest at Pinelands during the 1980's.
The above QSL card was received in response to my reception report from the 4th March 1986.
AUDIO CLIP
A recording of the reception has been preserved and is available here or by clicking onto the play icon below :
The recording was made at 0100 UTC on the 4th March 1986 via the FRG7 and 30 metre longwire antenna at Pinelands.
Posted by Gary Deacon at 7:35 PM No comments:

I can confirm your reception of Radio National broadcasting from Busselton on the new frequency of 1269 kHz at 1700Z on 28th June, 2010. This service changed frequency on April 13 this year to make way for a new News Radio service operating on 1152kHz which has just commenced test transmissions.

The Busselton transmitter site is located at 33 39 40S / 115 13 40E with Radio National 1269kHz operating at a power of 5kW in an omnidirectional radiation pattern (this may be varied in the future depending on the 1152Khz News Radio tests).