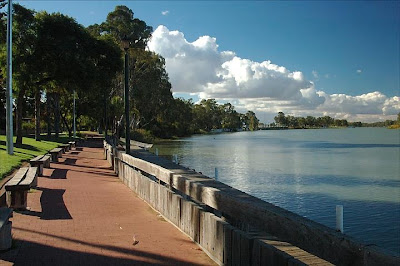 Renmark is situated on the banks of the River Murray.

5MV Renmark was heard during the remarkable reception conditions experienced on the 18th May this year. The 2 kw signal made it through to Fish Hoek via the M37V Ultralight and 220 metre BOG.

During DU reception, 1062 kHz is usually occupied by 4TI Thursday Island which in itself is an interesting catch being the most distant Australian MW station from Fish Hoek (over 12 282 km away).

Graham from the ABC kindly verified my reception report and included a transmitter coverage map.
Posted by Gary Deacon at 9:24 PM No comments: 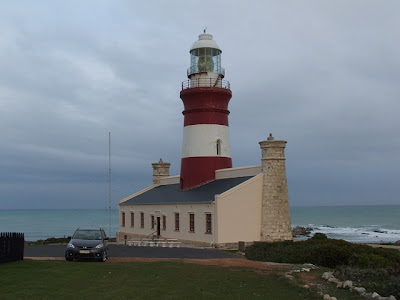 Built in 1848, the Cape Agulhas lighthouse is the second oldest working lighthouse in South Africa.

Cape Agulhas (34° 49' 58" S, 20° 0' 12" E) is the most southern tip of the African Continent and is also the official dividing point between the Indian Ocean and the Atlantic. Early Portuguese seafarers, rounding this dangerous point called it L'Agulhas which means Cape of Needles (referring to the jagged rocks of the coastline or the fact that a compass shows no real deviation between true north and magnetic north at this location). 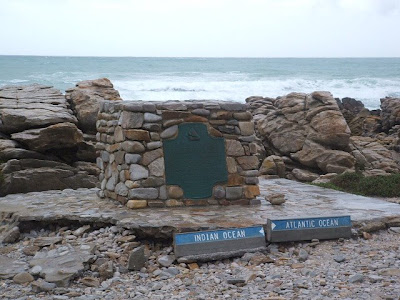 The southern-most tip of Africa is also the official dividing point between the Indian Ocean and the Atlantic. 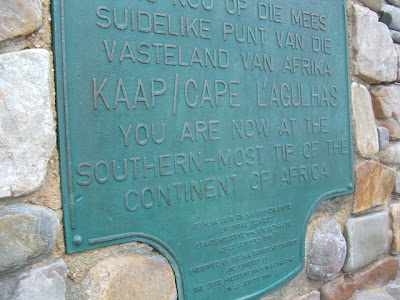 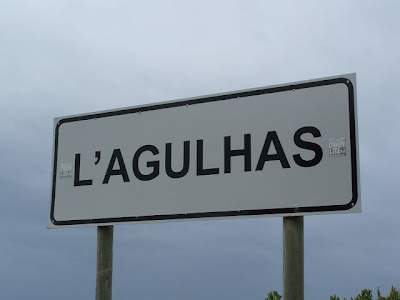 L'Agulhas / Cape Agulhas has been on my list of proposed dxing destinations for some time so we took advantage of an opportunity to visit the area during a recent family holiday. We booked into the Cape Agulhas Backpackers, situated in neighbouring Struisbaai.

Later that evening I checked the AM reception with the barefoot Sony SRF-M37V. 720 Perth and 1503 Taiwan were already in at 1545 UTC so it was with great anticipation that I set off for the short drive to Cape Agulhas. 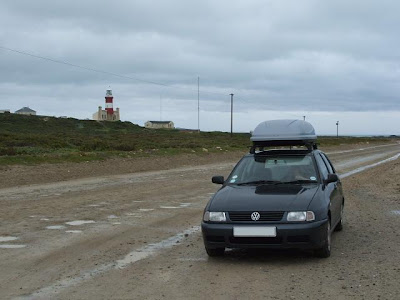 The dx location situated west of the Cape Agulhas lighthouse.

Dxing from the car, just past the Cape Agulhas lighthouse (with the beam sweeping overhead) at about 350 metres from the southern most point of Africa, was a memorable experience with good reception from Asia and the Far East.

I used the M37V and 220 metre BOG aimed at 90 degrees towards Indonesia - the most convenient direction in line with the gravel road along the coastline in front of the lighthouse. 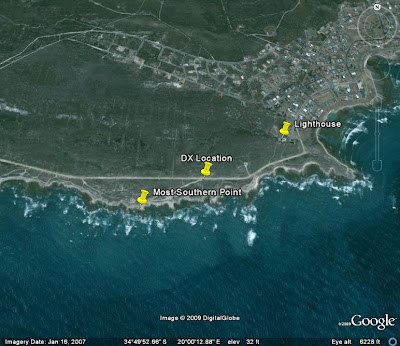 Loggings during the evening of the 11th July included :

A panoramic view from the lighthouse. The dx location along the coastal road and most southern point of the African continent can be seen towards the right (Click onto pic for a higher resolution).
Posted by Gary Deacon at 11:15 PM No comments: 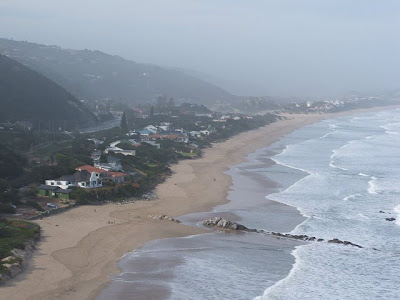 Situated 15 km east of George on the Cape Garden Route, the scenic area of the Wilderness overlooks the Indian Ocean and consists of golden beaches, lakes, a placid lagoon, indigenous forest and over 230 bird species. 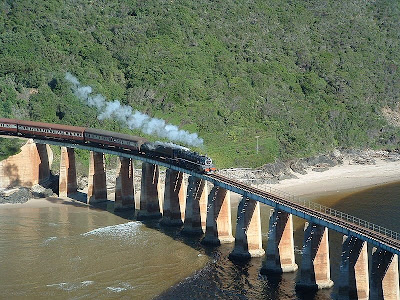 The Outeniqua Choo Tjoe crossing the Kaaimans River into the Wilderness. 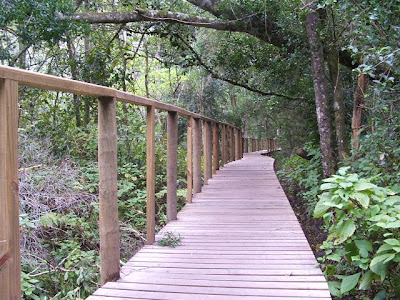 The picturesque forest walk alongside the Touw River.

A recent holiday with the family to the Wilderness included some interesting AM dxing.

I have often experienced remarkable results from various locations with elevated positions along the South African coast ( ie Millers Point, Jongensgat and Cintsa). After searching for an elevated position, I found an interesting receiving location situated approximately 50 metres above and 50 metres from the Indian Ocean. 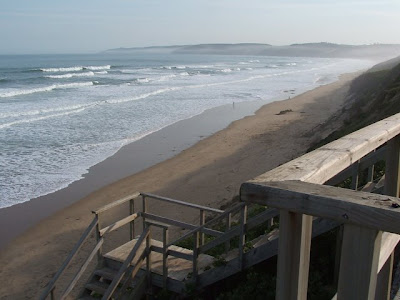 After parking the car in the small public car park above, I descended the 122 steps to the beach while rolling out the 220 metre receiving antenna which was directed along the coastline towards Australia - a sloper for the first 50 metres which became a BOG for the remaining 170 metres. I returned to the car and dxed with the Sony SRF-M37V ultralight. 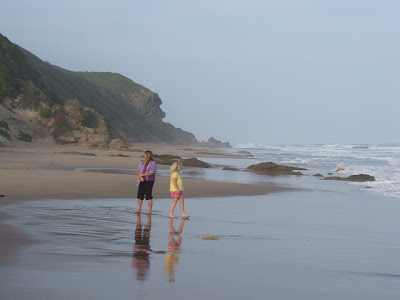 On the beach while my advisors calculate the direction to Australia !

Loggings during the evening of the 4th July included : 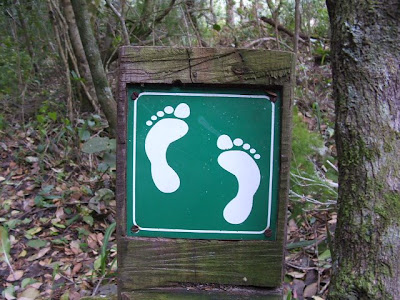 Could this be an official sign for barefoot dxing ?

6WF Perth on 720 kHz was received barefoot (via the internal ferrite antenna) at the elevated holiday cottage, situated approximately 500 metres from the coast. The reception occurred on the 6th July at 2130 UTC with a clear "7-20 ABC Perth" id followed by ABC news. 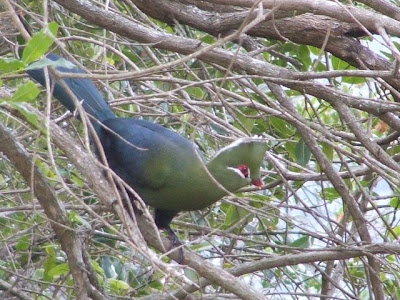 The Knysna Lourie, photographed opposite the holiday cottage. 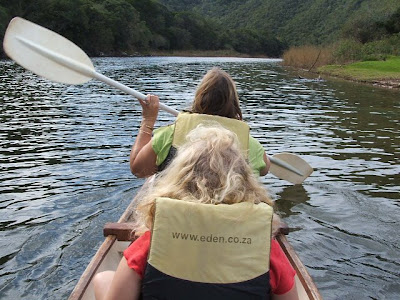 Rowing up the Touw River - a memorable and tranquil experience.

After an enjoyable stay in this picturesque part of the world, we proceeded to the impressive Garden Route Game Lodge before moving on to Cape Agulhas which included an intersting dx session at the most southern tip of the African continent. More about that in my next post. 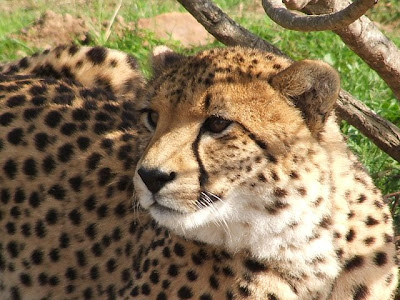 The cheetah, the most illusive of the big five, photographed during our stay at the Garden Route Game Lodge.
Posted by Gary Deacon at 7:58 PM No comments:

5SY Streaky Bay was heard during the excellent reception conditions experienced at Fish Hoek on the 15th April.

Graham from the ABC kindly verified the reception.

Zoom in, zoom out or shift the following Google Maps image of the 5SY transmitter site as required.