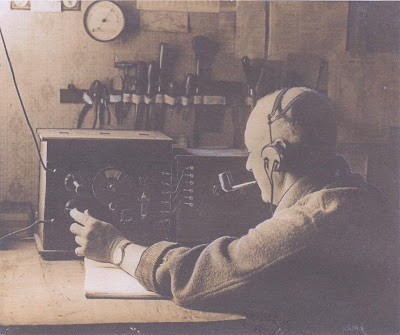 Charles "Copper" Slingsby tuning in during the 1920's (Photograph with kind permission from David Slingsby).

What began as a recent chance discovery of an interesting letter from David Slingsby on the KDKA website has resulted in an astonishing futher discovery - an unprecedented treasure trove of priceless QSL's and original letters, addressed to his grandfather Charles, from pioneering and experimental short wave radio stations which broadcast during the 1920's!

The likelihood of individual QSL cards and especially QSL letters to survive over 80 years is rare, so to discover that an entire collection from this era has remained intact (barely a few minutes from my QTH) is quite remarkable to say the least! 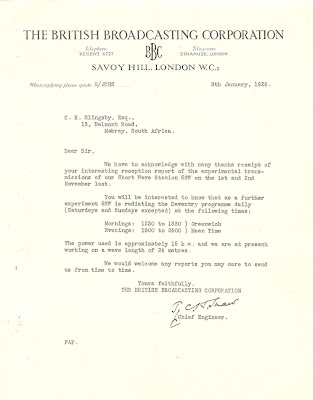 A rare January 1928 QSL letter from the BBC experimental shortwave station 5SW at Chelmsford was possibly one of the first replies to be received in South Africa. The reported date of reception in Cape Town was on the 1st and 2nd November 1927 : at least 10 days before the official commencement date of the 11th November that year. The station operated on 11 750 kc with a power of 15 kw.

After a phone call to David, I was invited to view the astonishing well preserved collection of early QSL's, letters, log books and original newspaper cuttings, meticulously compiled by grandfather Charles.

Charles Slingsby, or "Copper" as he was nicknamed (he was born with a shock of red/auburn hair), was one of the first pioneering short wave radio enthusiasts to operate in Cape Town, South Africa. During the 1920's Copper dxed with a home constructed three valve receiver from his radio shack, situated in Belmont Road, Mowbray and later, Thelma Road, Claremont (suburbs of Cape Town). 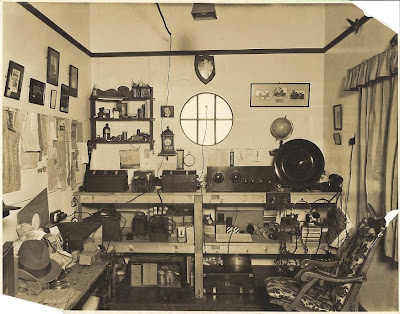 It is interesting to note that the Post Master of Cape Town, Mr. Girling, lived next door. Girling understood morse code and was able to pick up news from passing ships. Perhaps this futher helped to ignite Copper's interest in long distant radio reception.

Broadcasts were meticulously recorded in various log books. Fortunately, thanks to grandson David who has a great interest in family history, three of these logbooks have been preserved alongside the QSL's and letters and serve as a fascinating record of the long distance radio reception experienced in Cape Town during the 1920's.

Copper's dxing skills and follow-up reporting resulted in the various interesting QSL's and letters from pioneering and experimental short wave radio stations in the U.S.A. , U.K. and Australia. These stations appreciated the important feedback regarding distant reception. It must have been a pioneer dxer's dream to receive the enthusiastic replies from KDKA Pittsburgh, WGY Schenectady, 2NM Caterham, 5SW Chelmsford and 3LO Melborne to name a few! 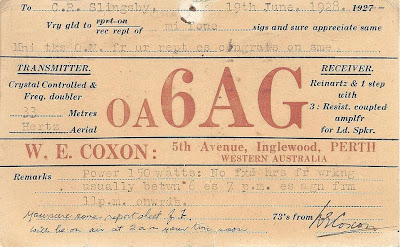 A rare 1928 QSL card from the amateur experimental shortwave broadcasting station 6AG Perth Western Australia, operated by Wally Coxon. In 1928 the shortwave transmitter was co-sited with the mediumwave unit of 6WF on the rooftop of the Westralian Farmers building, located in downtown Perth. Operating on 33 metres with just 150 watts, the station would have been a memorable catch and an impressive dx achievement!

Local newspaper reporters from the Cape Times and Cape Argus would often sit alongside Copper and write up world events from the broadcasts received on his radio. For example, the famous Jack Dempsey / Sharkey fight broadcast via KDKA from the Yankee Stadium, New York on the 22nd July 1927 was received at Copper's radio shack and reported by the Argus sports writer.

Copper Slingsby also wrote various articles which were published in the two local newspapers. He advised on the purchase or construction of a shortwave receiver, how to tune in and what one could expect to hear. "Wireless", especially shortwave, was in its infancy and the articles would have done much to promote an interest in tuning in. 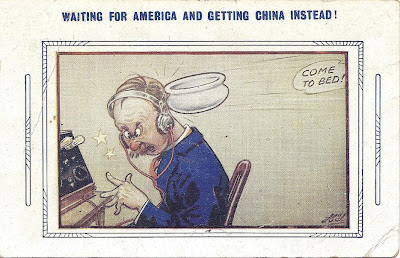 Charles Slingsbly was born on the 17th May 1887. He joined the British forces in 1901 at the age of 14 as a bugler during the Anglo Boer War. He met and married Violet Alice Dove in a whirlwind romance lasting a week during WW I. They had four children, three of whom are still alive today. It is interesting to note that the family arrived back from Kenya and spent a brief time at Fish Hoek before moving to Mowbray.

My thanks and appreciation to David Slingsby for his kind hospitality (the coffee was most enjoyable by the way!), for preserving an important part of pioneering radio history and for his enthusiasm and willingness to share the fascinating collection and information.

I hope to share some more early QSLs, letters, and articles from the Copper Slingsby collection in future posts.
Posted by Gary Deacon at 3:15 PM 4 comments:

I have been approached by Hans van de Groenendal from the South African Radio League to present a regular audio programme for "Amateur Radio Today" - the weekly radio programme for radio amateurs, shortwave listeners and the electronic hobbyist - aired by the SARL. 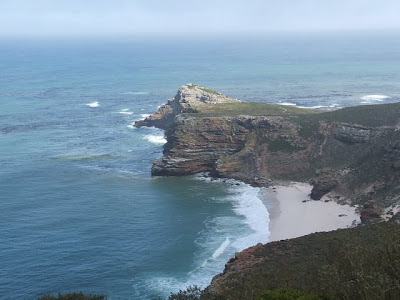 The second programme touches on the dramatic ABC Local Radio coverage of Catagory 5 Cyclone Yasi as it hit the north Queensland coast this week. The radio coverage was well planned, professional and impressive to say the least!
Apart from the non-stop coverage of updates and reports, listeners were invited to phone in with their personal experiences of the effects of the cyclone as the storm ripped through their respective neighbourhoods. Some of the calls were quite intense.
Broadcast Schedule

You can listen to Amateur Radio Today every Sunday at 08:00 UTC on the following frequencies:

Repeat broadcasts are availlable every Monday at 19:05 UTC on 3215 kHz AM.

The weekly radio programme is also available via a Podcast at :

WFAN New York NY on 660 kHz was heard with decent peaks during the recent visit to Noordhoek. The station made it through on the 13th January 2011 at 0320 UTC via the Sony SRF-M37V and 220 metre BOG. 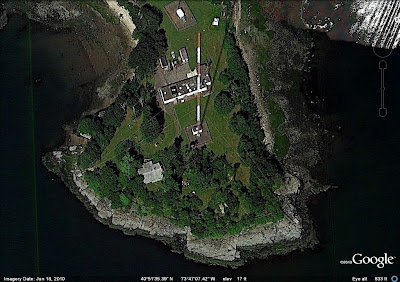 High Island is a small private island which is connected to City Island via a small bridge and a sandbar that emerges at very low tide. 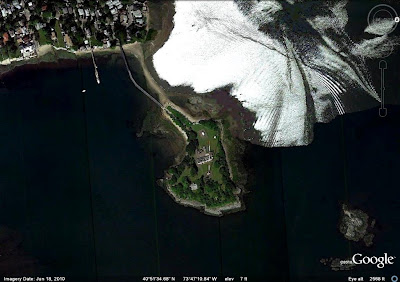 In the early 20th Century the island was privately owned with a community of summer rental cottages for approximately 40 families. In 1961, the island was purchased for the use of radio transmission towers.

The island consists of the transmitters and antenna towers for 660 WFAN and 880 WCBS, both of which are owned by CBS.

On August 27, 1967, a small private airplane crashed into the radio tower, destroying the antenna and taking WNBC and WCBS off the air. Both stations were able to borrow nearby transmission facilities for about a week, until an emergency tower could be erected on the island. The permanent replacement was built with a second (shorter) tower as an emergency backup. 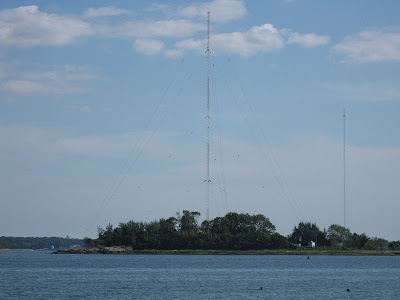 Another view of High island, showing the WFAN antenna mast in the foreground with the auxilary tower behind (Photograph Wikimedia Commons).

The taller of the towers is 549 feet (167 meters). The shorter tower is 300 feet (91.4 meters) and was built in 2001 to replace the emergency tower erected in 1967. The proximity of these two AM radio stations has, at times, caused interference on telephones and electronic equipment on nearby City Island.

High Island is an AM radio transmission facility with no studios or tower tenants (WFAN and WCBS broadcast from studios located in Manhattan).

A full-time caretaker's residence was in use from 1961 to 2007. The island is currently uninhabited and maintained by the radio stations' engineers and contractors.