WTAM made it through over a distance of 13 197 km / 8 200 miles via the 5 cm internal ferrite antenna of the Sony SRF-M37V ultralight, during the excellent reception conditions experienced on the 13th January.

" Gary, this is fantastic. I, too, am a "DXer"...but I couldn't imagine hearing a station from the other side of the world. This has been forwarded to our station manager. I'll be sure to send over (via postal mail) something nice from our station...an autographed photo or something like that of our morning team, Wills and Snyder. That's the show that I work with. Try tuning in super early on a Sunday morning...you might even hear my show! It would be 5am to 8am in your time zone. Thanks so much for writing! "

Many thanks for you kind reply Dave !
Posted by Gary Deacon at 4:30 PM No comments:

General Sales Manager Chris Thompson kindly verified the ultralight reception of 830 WCRN during the excellent T/A conditions on the 12th January 2009 at Noordhoek.

The station was heard with some surprising peaks over a distance of 12 507 km / 7771 miles (A personal first).
Audio

"Gary,That’s pretty amazing. From your description it certainly sounds like you had KMOX on.I’m forwarding this on to our engineering team. Again,Thank you."

I thought I'd share the surprise reception of 1120 KMOX, St.Loius with the Sony SRF M37V via its internal 5 cm loopstick antenna !

The station made it through to my QTH here in Fish Hoek this morning at 0305 UTC with an id and 5 day wx forecast. I nearly fell off my chair as KMOX is not often heard even via a conventional receiver and beverage antenna !

At over 13 776 km / 8560 miles this appears to be the most distant of the 9 North American AM stations to make it through "barefoot" to this part of the world so far.
Posted by Gary Deacon at 10:43 AM No comments:

Today I was fortunate to receive my first QSL from T/A reception on an ultralight.

The reception occurred at Noordhoek, Cape Peninsula via the Sony SRF-M37V and 220 m BOG. The 5kw signal from 1410 KQV managed to make it through over a distance of over 13 000 km. Also a personal first. 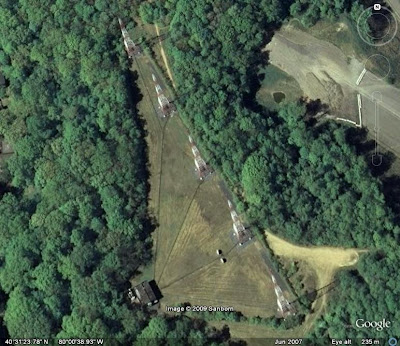 Google satellite image of KQV's impressive five antenna tower array. A favourable night time pattern using all five towers would have contributed greatly to the reception of the station at Noordhoek.

Posted by Gary Deacon at 5:21 PM No comments:

Ultralight DXing with the Sony SRF-M37V 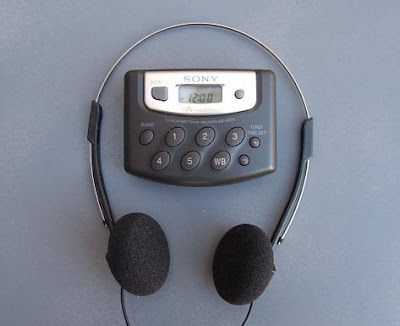 Fellow dxer Vince Stevens visited us on Sunday evening (11 January), during our annual holiday at Noordhoek (20 km south of Cape Town). He kindly presented me with a Sony SRF59, aligned by Gary DeBock and a Sony SRF-M37V. These radios are part of a generous collective contribution of ultralights from dxers John Bryant, Guy Atkins & Gary DeBock. Thanks again guys !

Right from the beginning of briefly trying out the Sonys during that first evening, I relized that, despite their size, these are very capable receivers ! The barefoot reception of numerous African MW stations from Botswana, Lesotho and Mozambique via the SRF59 was a real surprise. The SRF-M37V has a nice feel about it and produced my first barefoot ultralight TI reception of Radio Mayotte on 1458 kHz and CNR1 on 1134 kHz !

The following morning Vince and I headed down the road for what turned out to be an interesting dxpedition.

I decided to use the SRF M37V and simply wrapped a few turns of the near end of the 220 metre BOG around the set.

The results were quite astonishing with strong peaks from the USA and a few Canadian stations across the dial !

The following morning (13 January), I deceided to visit the same location in order to have a go at possible barefoot reception with the M37V.

The main "reference" receiver was an ICOM R71 which I conncected to a 220 BOG directed towards North America.

It was a real surprise to receive my first TA signals from the USA on the barefoot M37V, during some serious propagation peaks !

I also heard a "flutter" from CHML on 900 kHz but could not quite resolve the audio.

Another highlight during a brief listen that evening (13 January) was the barefoot reception of Taiwan on 1503 kHz.