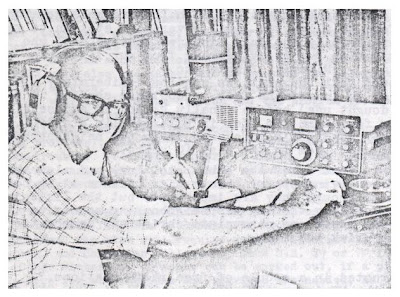 Reg Sweet (Photograph from the September 1980 issue of the SASWL).
A dramatic account which recently caught my attention while researching through various back issues of the SASWL concerns a distant SOS distress call which was received by South African dxer / amateur radio operator Reg Sweet, back in 1980.
The heart warming story serves as a tribute to Reg Sweet whose valuable dxing skills helped save the lives on an Australian yacht in distress.
Reg Sweet, branch correspondent of The Daily News and an ardent radio ham, received a telephone call from Toowoomba in far-off Queensland, Australia : "My name is Chris and I am Jenny's sister. It's been five dreadful days, but we're very happy now. We just want to thank you."
Six hours or so before that, Reg had picked up an almost inaudible SOS distress signal while listening from his QTH in Durban North, South Africa. It came from the Australian yacht White Wave, a tiny sloop which had taken a hammering from hurricane Albert, lost its mast and its radio antenna, and was unaccounted for somewhere in the Indian ocean. Five days had passed. Its radio operator was the girl Jenny, sister of Chris. She held the Australian novice amateur certificate, which was just as well, for it became their lifeline. The remainder of the crew were her husband Steve and his brother Gary. It took them five days to rig up a makeshift mast, a bit of sail and a rudimentary antenna for Jenny.
Reg was one link in a far-flung radio hams "search party" when Jenny tapped out her SOS, her call sign, the name White Wave and her position on the morse key. He was the only one to read that morse signal. It never carried to Malaysia or Australia. But he read back to the others what he had copied from White Wave and informed Durban Radio of his find while the Australian hams reported to Marine Operations, Canberra.
Three ships were diverted. One, the Alta Queen, found the yacht within 24 hours, 160 km or so from Rodrigues Island. The White Wave saga was over.
"Certainly, that call from Toowoomba moved me. I confess I went to bed a very happy man", said Reg.
Reg himself sent out an SOS during World War 2 when he had to ditch his Spitfire in the sea off Malta. It saved his life ...
From the Sepetmber 1980 issue of the South African Shortwave Listener (The monthly magazine of the defunct SADXC).
Posted by Gary Deacon at 1:02 PM