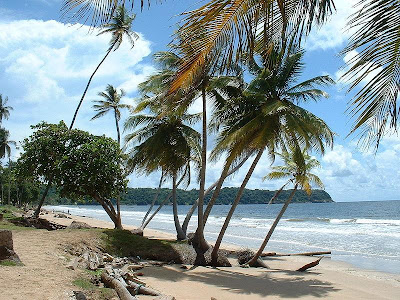 Mayaro Beach coconut palms on the east coast of Trinidad (Photograph Wikimedia Commons).
It was a pleasant surprise to hear NBS Radio 610 from Trinidad for the first time (A South African First) on the 29th September 1985.
I was fortunate to receive the NBS for about 45 minutes, until increasing co-channel QRM occurred from the usually dominant Brazilian station, Radio Itatiaia, while dxing with the FRG7 and 30 metre longwire antenna at Sandbaai. General Manager Frank Thompson kindly verified my reception report with a QSL letter. 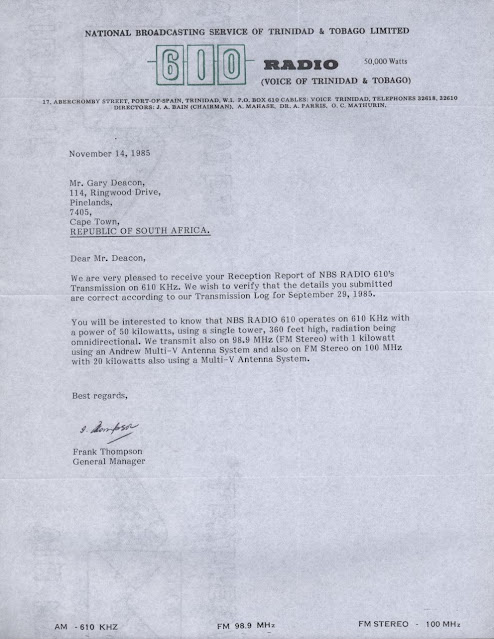 The QSL letter from NBS General Manger Frank Thompson (click onto the image for a higher resolution).
AUDIO CLIP
The historical recording of the first time I heard the NBS on 610 kHz from across the Atlantic Ocean has been preserved and is available here or by clicking onto the play icon below :
The recording was made at 2215 UTC on the 29th September 1985 via the FRG7 and 30 metre longwire antenna at Sandbaai and includes the beginning of the news programme , "The Caribbean Today".
THE END OF A CARIBBEAN AM RADIO STATION
During the 1990's, Radio 610 progressively lost its traditional listening audience due to a weakening of the quality of its broadcast signal and a diminishing of allocated financial resources to upgrade equipment and programming. Both radio and TV broadcast entities of the National Broadcasting Network / NBN (a name change in 2001) ceased operations at midnight on January 15, 2005.
Posted by Gary Deacon at 11:31 AM

I am from Trinidad and I miss the Old AM radio stations we had NBS Radio 610 and Radio Trinidad AM 730, its amazing that the station could've been heard all the way in Africa across the atlantic from what I understood the station signal had a 1000 mile range, obviously Africa is much further away from Trinidad than 1000 miles.
From personal experience I remember being in Puerto Rico which is is about 600 miles to the north up the caribbean island chain and I was able to pick up both NBS Radio 610 and radio trinidad am 730 but only at night

Thank you for your interesting comments. The reception was a rare occurrance at a very good coastal dx location for the occasional distant trans-Atlantic reception of a few other radio stations from the Caribbean.

Hi good day, My grandfather Nadia Alleyne was apart of radio 610, never got the chance to meet him. Do you have any old pictures of the staff at 610? It would be greatly appreciated as I'm hoping this picture can assist me in meeting with my aunts and uncle or my cousins on my grandfather side.