The Early Years Of A Dxer In South Africa - Part 3 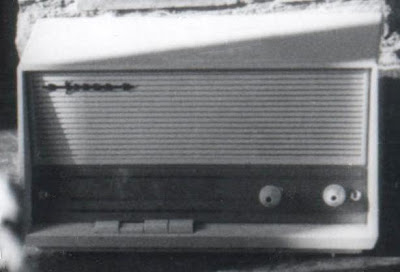 This 1960's Siera valve radio produced good mediumwave reception.
MEDIUMWAVE DXING
One evening during 1973 I decided to tune across the mediumwave band on the family Siera valve radio. The sensitivity of the set proved to be quite good on mediumwave and I was pleasantly surprised to hear and identify Radio Botswana (50 kw) on 971 kHz for the first time. The signal was remarkably clear and marked the beginning of a search for other stations operating in the mediumwave band. During the next few evenings I managed to hear and identify Radio Mozambique on 737 kHz (50 kw), Radio Swaziland on 881 khz (10 kw) and Radio Lesotho on 899 kHz (10 kw). Part of the fascination of listening to stations on the mediumwave band was the content of the programming which included local news and announcements - an interesting change from the external service shortwave broadcasting of the day.
DX PUBLICATIONS
A few dx publications helped to futher my knowledge while providing inspiration and enthusiasm for the hobby.
HOW TO LISTEN TO THE WORLD (1972) 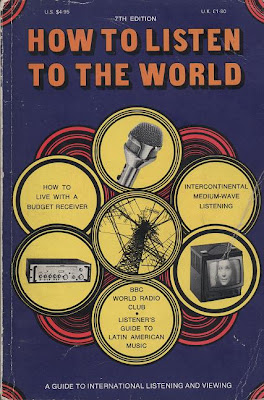 I purchased a 1972 edition of "How To Listen To The World" from Technical Books for R3.70. Interesting chapters included : "How To Live With A Budget Receiver" by Gordon Nelson & Russel Edmunds and "Intercontinental Mediumwave Listening" by Richard Wood.
WORLD RADIO TV HANDBOOK (1974) 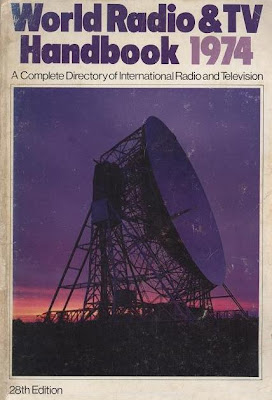 The "World Radio And TV Handbook" remains a valuable source of information for today's dxer. I purchased the 1974 edition of the handbook for R5.80.
DRAKE RECEIVERS
Although it would be quite a few years before I would be able to locate a classic second hand R7, I used to read about the ledgendary range of Drake Communications Receivers with great interest. 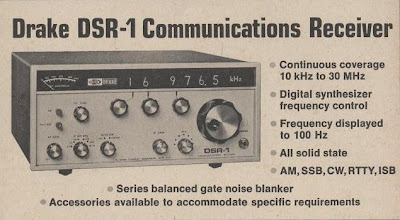 This advertisement for the Drake DSR1 receiver appeared on page 45 of the 1974 WRTH. The receiver included an innovative digital synthesiser display with an accuracy of up to 100 Hz - an awesome facility for a dxer in 1974 ! The advertised price in the 1974 Popular Electronics Communications Yearbook was 2 295 dollars U.S. 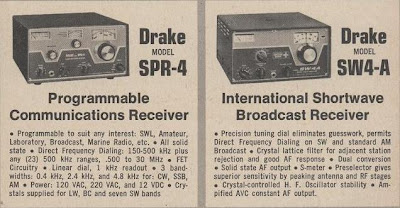 The Drake SPR4 was also advertised and proved to be a well built, top performing set. It has since achieved the status of a classic receiver. The 1974 retail price was a somewhat more affordable 579 dollars U.S.
SHORT WAVE WORLD The 1974 Wednesday April 24 edition of The Argus "Short Wave World" column dealt with the bandspread capability of receivers available at the time.
"Short Wave World" was a weekly newspaper column written by respected South African dxer Gerry Wood. Readers were invited to write in with their dx questions. The column, which appeared in the Argus during the early 1970's, also served to promote the dxing hobby and the South African DX Club (SADXC).
THE SADXC 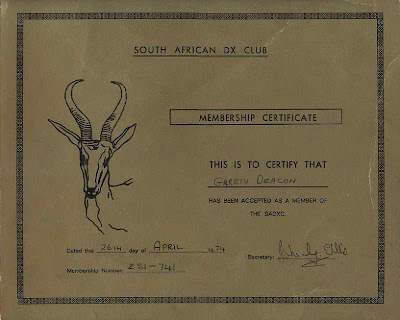 I joined the SADXC in 1974 and received my first copy of the SA DX News. I was astonished to read about the remarkable loggings of experienced and dedicated South African dxers at the time. 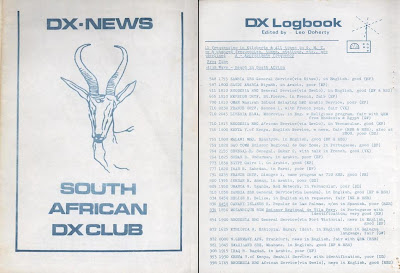 The front cover of the SADXC Magazine and the first page of the August 1974 edition of the "DX Logbook" column.
Many of the reported stations were heard fairly regularly in South Africa via modest receivers and random longwire antenna. Click onto the image for a high resolution. The mediumwave loggings especially caught my attention. Various mediumwave radio stations got through from Africa and Europe with good signals. The trans Atlantic reception from the U.S.A. (heard in Cape Town) and trans Indian Ocean reception from Australia (noted in Durban) was intriguing and almost unbelievable to say the least !
Posted by Gary Deacon at 9:15 PM