The Early Years Of A Dxer In South Africa - Part 1 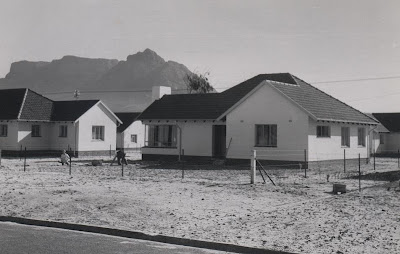 My earliest recollection of radio began at our home in Pinelands, Cape Town, South Africa. This photograph, taken in October 1958, shows our new home with Devil's Peak and Table Mountain in the background.
As an introduction to a series of chronological posts regarding the dxing experience, I thought that I would share a few early memories of my fascination with radio.
LOCAL RADIO IN SOUTH AFRICA
I was fortunate to grow up during the golden years of radio broadcasting in South Africa (Radio was the main broadcasting entertainment available in South Africa up until 1975 when television was introduced).
I was apparently drawn to the sound of the radio as a toddler. I searched through our family photographs and discovered a 1960 pic of yours truly as a 2 year old in front of an interesting looking 1950's "Global" mediumwave radio : 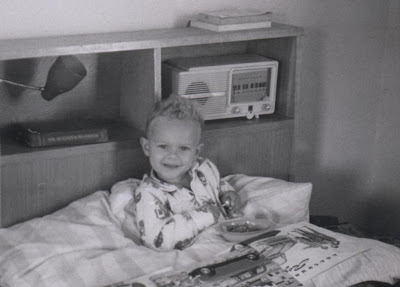 A subliminal interest in radio probably began with music and announcements from the family mediumwave receiver behind me !

SPRINGBOK RADIO
Springbok Radio was a popular local radio service which operated in South Africa from 1950 until station closedown in 1985.
Like many of my school friends I used to look forward to listening to "No Place To Hide", featuring the adventures of Mark Saxon which was broadcast at 7:15 pm every week night during the 1960's. "Squad Cars" was broadcast at 7:30 pm every Friday night a few years later and used to capture the imagination of the entire family too ! 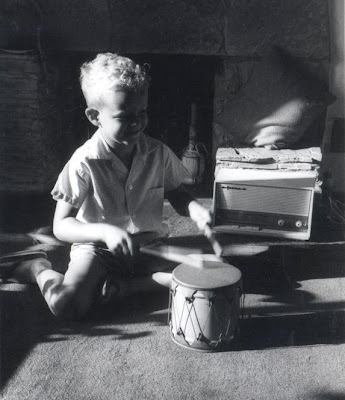 This 1963 photograph suggests that as a 5 year old, I was practising my drumming along with music from the "Siera" family radio. The same modest valve receiver would eventually be used to hear exotic Trans Atlantic dx in the 1970's !
RHODESIA
A family visit to Salisbury, Rhodesia in December 1968 included a memorable tour around the country. Apart from a highlight of being able to watch TV for the first time as a 10 year old, I recall listening to the local radio services which included the RBC (Rhodesia Broadcasting Corporation) and Radio Jacaranda. 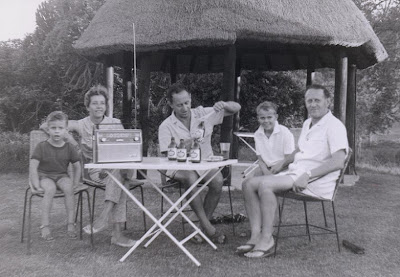 This photograph of the family was taken at a rest camp near Victoria Falls. My guess is that the "Normande" portable radio was tuned to the RBC for a news update.

LM RADIO
Lourenco Marques Radio or "LM Radio" broadcast from neighbouring Mozambique. In the late 1950s the station underwent a major format change in order to target the younger generation in South Africa.
An attempt to listen to the "Top Twenty" hits from LM radio as a 12 year old in 1970 marked the beginning of an interest in distant radio reception. Two years later in 1972, I discovered the fascinating world of dxing !
WEBSITE
The LM Radio Museum and Sound Archive at http://www.lmradio.org/ records the history of Radio Clube de Moçambique and Lourenco Marques Radio.
Posted by Gary Deacon at 2:16 PM

As you know, my name is Yimber (DXer in Colombia).
Please check these blogs.

I´ve put a Cape DX banner about early years of a dxer in south africa in my blogs.

By the way, Good Listening!

Thank you for providing the links and your interest in "The Early Years Of A Dxer In South Africa" which is most appreciated!