The Early Years Of A Dxer In South Africa - Part 4 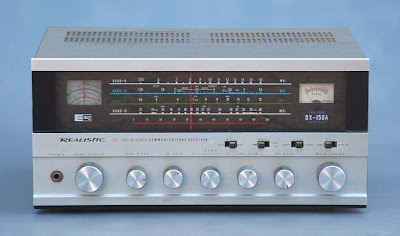 The Realistic DX150A Communications Receiver - Fun to operate and a sensitive performer on shortwave (Photograph Gary Deacon).
REALISTIC DX150A RECEIVER
My first communications receiver was a Realistic DX150A, obtained in 1974 from HAMRAD (A popular electronics store in Cape Town at the time). The set was a single conversion analog reciever with good looks and a sensitive performer on short wave with a quiet noise floor. Signals could also be peaked with the antenna trim control which worked well with a modest longwire antenna. The performance on the mediumwave band was attenuated though. The Siera radio remained the receiver of choice for mediumwave reception at the time.
THE LISTENING POST AT PINELANDS IN 1974 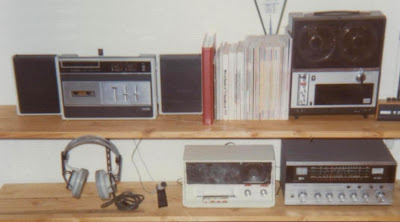 Top Shelf L to R : Hitachi Cassette Recorder and Toshiba Reel to Reel Recorder. Bottom Shelf L to R : Akai Headphones, Sony Microphone, Siera Valve Receiver (MW Reception) and Realistic DX150A Receiver (SW Reception).
TRANS ATLANTIC MEDIUMWAVE RECEPTION
Encouraged by the 1974 SADXC reports of trans Atlantic reception of mediumwave stations from the U.S., I decided to try listening out for signals from that part of the world. The length of a basic outdoor longwire antenna was increased to 20 metres. I also managed to increase the height of the antenna by another metre or two. A few mornings later while tuning across the mediumwave band with the Siera receiver, I stumbled across a station broadcasting news reports from an announcer with an American accent. The station turned out to be WINS New York NY on 1010 kHz at over 12 558 kilometres away ! The excitement of hearing my first trans Atlantic mediumwave station from the U.S. was repeated with the reception of WRVA Richmond VA on 1140 kHz soon afterwards ! 1010 WINS and 1140 WRVA became good indicators for TA reception from the U.S.A.
MEDIUMWAVE QSLs
I posted my first mediumwave reception report to Radio Lesotho on the 8th July 1974. It was exciting to receive a QSL card from the station in only 8 days ! 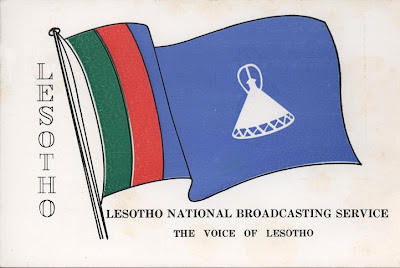 My first QSL card was received from Radio Lesotho , broadcasting on 899 kHz in the mediumwave band.
This marked the beginning of an interest to try and obtain a few more verifications from stations operating in the mediumwave band.
A conservative total of 13 mediumwave reception reports were sent out in 1974. The return percentage was encouraging with a positive response from 11 radio stations.
QSL highlights received from the U.S. that year included 820 WBAP, 1010 WINS, 1110 WBT, 1140 WRVA (a record distance), 1520 WKBW and 1530 WCKY. 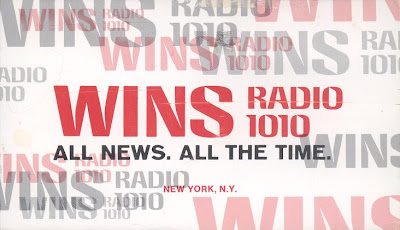 My first TA QSL card was received from 1010 WINS in 1974.
QSLs also serve to preserve an important piece of broadcasting history. Many radio station logo's and formats have changed over the years and are reflected in the verifications.
Radio stations from Ascension Island, Zimbabwe and Zambia no longer broadcast on mediumwave. QSLs from these countries are quite historical and certainly worth preserving.
Posted by Gary Deacon at 12:36 AM

Thank you John for your interest and generous comments !